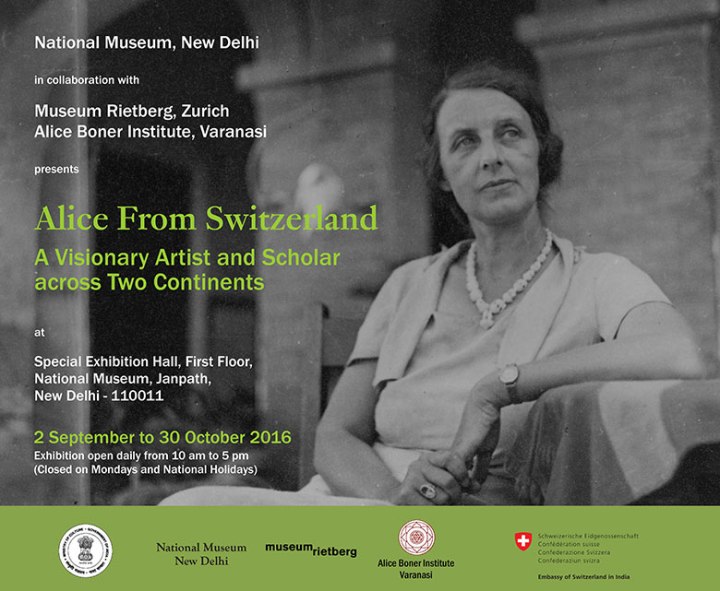 She came to India in the 1930s, made it her second home through much of her life, and left a legacy that globalised the country’s ancient and modern art forms such as dance, music, and architecture. And yet, questions still remain whether she has got her due more than thirty years after her death.

Switzerland’s Alice Boner made the exploration of India’s diverse culture the singular goalpost of her life. Her life, including the artists she worked with and the ancient structures she explored in her writings, is the focus of the latest art exhibition at New Delhi’s National Museum.

The exhibition, inaugurated on September 4, has been organised in collaboration with Zurich’s Reitberg Museum, which holds an exhaustive repository of Boner’s sculptures and miniatures, her diaries and manuscripts, and 30,000 photographs shot by her and others. Varanasi’s Alice Boner Institute, originally her home in India, has also contributed to the show.

The exhibition, “Alice from Switzerland”, chronicles Boner’s early life as a patron of the arts in the European country; her entrepreneurial years with Indian dancer Uday Shankar; and her intellectual inquiry into Indian architecture, particularly sculptures and temples, and the spiritual/religious themes emanating from them.

The art show, on view until October 30, has mounted several photographs, sketches, paintings, sculptures, and personal recollections that map the life of a person whose oeuvre cannot be slotted into a single occupation. And that is because of the nature of her artistic curiosity and probity that brought her to India.

She was a writer, painter, sculptor, translator, patrons of the arts, and a cultural ambassador, who showcased Indian art to a global audience in Europe and the United States. She observed the Indian life closely, and her photographs served as a foundation stone for much of her work. Her lens captured Indian weddings, religious festivals, caravans, fellow travellers, and colleagues, especially performing artists; and well-known figures such as Rabindranath Tagore.

Early Life, and Passage to India

Her upbringing was immersed in art. Born in Italy in 1889, she studied painting and sculpture in Brussels and Basel in her early years. She moved to Paris in 1928, where she worked on sculptures with materials such as way, wood, bronze and stone.

In 1936, she rented an apartment in Varanasi, which had a terrace overlooking the Ganga river. Her house was the meeting point of artists, musicians, writers and intellectuals; where they engaged in art through concerts and conversations.

India was to be her home for more than forty years.

The beginning of her lifelong journey in India had its roots in a meeting with Shankar in Europe, in 1926, during one of the cultural shows that she was organising. As a common interest in promoting art brought them closer, in 1930, they embarked on an extensive trip to India to scout for talent for their overseas tours. This initiative led to the birth of a dance and music troupe, which they co-directed. Shankar, who was heavily influenced by traditional Indian dance forms such as Kathakali, Bharatnatyam and Kathak, provided artistic content for the troupe’s performances. Boner, true to her entrepreneurial skills, worked as the financial manager, advisor and manager.

Zohra Sehgal, who later became a household name in India because of her appearances in Hindi films, also performed for the group. Legendary Indian musician Allauddin Khan – father of sarod maestro Ali Akbar Khan, and teacher of Uday’s much younger sibling Ravi – was a soloist for the troupe. Ravi, then in the first decade of his life, had begun to be an early performer for the troupe as a dancer and musician, before he became Allauddin Khan’s disciple.

Fallout with Shankar, and “The Third Adventure”

The working relationship of Boner and Uday lasted a little less than a decade, but their team contributed immensely to the renaissance of India art domestically and abroad. During that period, they organised shows in Europe, United States and India, until a misunderstanding caused their split in 1939. The split didn’t stop Boner from collaborating with or offering patronage to other Indian artists, musician and dancers. Indian classical dancer Shanta Rao (1928-2007) was one of them.

Given Boner’s large body of work, the joint venture with Shankar seems a smaller part of her larger connection to India. From the 1940 onwards, she began cultivating an interest in Indian temple architecture, and principles of composition in Indian sculpture – a foray that was to be her “third Indian adventure.”

“Now I am on my third adventure. The first was Indian dance. The second was Indian sacred sculpture. The third is Indian temple architecture,” she said.

In India, she documented pre-medieval era caves of Ajanta and Ellora, located in the Aurangabad region of Maharashtra, the ancient structures in Tamil Nadu’s Mahabalipuram town, and Odisha’s Sun Temple.

The analysis of Indian architecture, including temples, has a special place in Boner’s oeuvre, in which she sought to find a connection between designs in Indian architecture with the bigger, and often complex, themes of universal existence.

Her scholarly publications revealed a spiritual temperament, triggered by her life in the heavily religious and faith-driven city of Varanasi, believed to be one of the oldest cities of the world. Fascinated by the geometric forms, she researched symbols and forms in the ancient structures, and believed these were archetypes of all living forms.

Through the magnificent water colours series “Prakriti” (or creation), she depicted the “cosmological ideas about the Indian cyclical understanding” of time, represented in the much mythologised events of creation, maintenance and destruction. The triptych was thus titled in the same order: “Srishti”, “Sthithi” and “Pralaya”. The Goddess of Kali, similarly associated with the destruction of evil, preoccupied her work a great deal, resulting in large water colour paintings depicting versions of the divine feminine.

“Each day my eyes are opening a little more…” Boner said in 1930, the year she first travelled to India with Shankar. She was a true seeker. For example, during a trip to Kerala, she was taken in by the Kathakali dance form, then under the threat of being extinct, so much so that she began studying the mudras or postures. She also explored the dance form in water colours, the exhibition shows. More than thirty years later, she would explore Shiva Nataraja too, the cosmic dancer, in a scholarly work.

In the first decade of her stay in India, she met Tagore in Bengal in 1935, who read from his book “Gitanjali”. She recorded the meeting in a photograph, showing Tagore in his quintessential robe and flowing white beard. A year later, she photographed the gigantic religious gathering at the “Kumbh Mela” in Allahabad, located about 100 miles from Varanasi.

Her professional life was borne out of an intense curiosity to know more about art and culture, and in that she never walked a scripted path. Her personal life too defied convention. During her long stay in India, she developed an intimate friendship with Monu Mitra, who played a multi-faceted role in her life as a fellow traveller, manager, advisor, besides being a confidante.

The exhibition shows photos of Mitra, in which he’s either by himself or with Boner or their co-travellers. The pictures characterise him as an intense-looking, handsome, but a mysterious man. He died of a heart attack, much before his companion breathed her last in Zurich in 1981.

Boner was awarded Padma Bhushan, one of India’s top civilian honours, in 1974, for her contribution to art.

Even in her death, Boner returned to India in what appears to be a definite homecoming, and the end of a very exciting life. She was cremated in Varanasi, her home through most of her life, and her ashes, by Hindu custom, were immersed in the Ganga river that she lived by.

This is the first major retrospective/exhibition of Boner more than thirty years after her death, and it is perhaps an indication of the artistic and intellectual attention due to her. The exhibition travelled from the Chhatrapati Shivaji Maharaj Vastu Sangrahalaya in Mumbai, where it opened last year. However, it is yet to reach Varanasi, Boner’s second and final home, according to this review by Nandini Majumdar, because of lack of financial support.